This month we’re helping out the Kahlen family, who has been hit hard by the economy and by their daughter’s serious medical condition, tuberous sclerosis. In addition to financial assistance, we’d like to unite the artistic community to support Kent’s glassmaking work.

Here’s what we want to do: 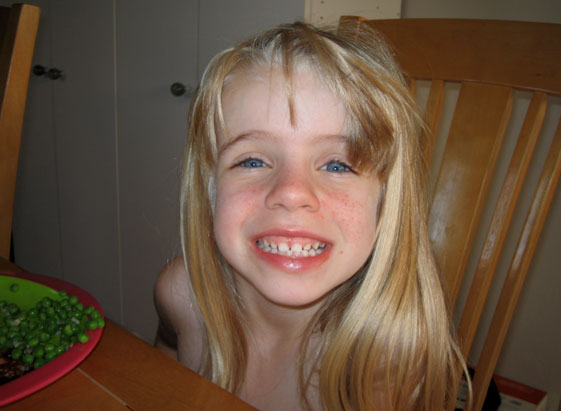 Brenna Kahlen was born with much anticipation in August of 2001. Our family had been blessed with a boy nearly two years earlier and we were thrilled to have a little girl too.   For a time life was perfect.  At about two months of age, Brenna began ‘twitching’ on her left side.  The ‘twitching’ didn’t sound serious to Brenna’s pediatrician so we decided to wait and see if Brenna would grow out of it.  By five months of age the ‘twitching’ had increased so much, we set up an appointment with a Neurologist.  We got the first available appointment four months away.  We would never make it to that appointment.

Despite the ‘twitching’, we were not overly concerned since Brenna seemed to be a normal, happy, healthy baby.  At Brenna’s six-month well baby visit it became apparent that something was amiss.  Brenna’s abdomen was distended and she was not gaining weight as she should.  An ultrasound revealed cysts in her kidneys.  Sitting in the Nephrologist’s (kidney doctor) office one month later we learned that the cysts in Brenna’s kidneys were causing her to have terrifyingly high blood pressure.  At not quite seven months of age, Brenna’s top blood pressure number was well over 200—something that would have killed an adult.  She was admitted directly to Children’s Hospital of Orange County (CHOC) from the office visit and that is when our nightmare really began.  Once we were in the Pediatric Intensive Care Unit, the doctors started asking questions. Was Brenna rolling over and sitting up?  Did she ever have seizures?  Did she have a light colored birthmark?  Did we know she had a heart mummer? Then the tests began.  First we had an EEG, then an Echocardiogram, an EKG, an MRI and a chest x-ray.  All the while the doctors were trying to bring Brenna’s blood pressure down.  I thought my baby was dying.  As the test results started coming in we finally got her diagnosis:  Tuberous Sclerosis.  Although we finally had a name for the medical problems Brenna had, we didn’t understand it.

Tuberous Sclerosis Complex (TSC) is a genetic condition and everyday in the United States two children are born with it. On August 15, 2001, one of those two children just happened to be our Brenna.  There are more than 50,000 people in the United States with TSC and more than one million worldwide.  Nevertheless, TSC is considered rare and there is no cure.  TSC is the leading genetic cause of epilepsy and the second leading genetic cause for autism.  Behavioral issues are of serious concern and TSC individuals have a much higher rate of attention deficit disorder (ADD), bi-polar disorder and obsessive-compulsive disorder (OCD).  There are more people with TSC than Cystic Fibrosis, Lou Gerhig’s disease (ALS) and Hemophilia, yet most people have never heard of it.   Of more concern, many doctors and nurses have only read about TSC and have never encountered a patient with this disorder.

Today, we know that the ‘twitches’ Brenna was having were actually seizures.  Since they began when she was two months old, those seizures have grown in intensity and frequency.  Thus far we have been unable to control Brenna’s seizures with medication.  We are currently trying yet another medication and are considering a special diet to try and stop the seizures.  Unfortunately, if her seizures continue Brenna may have to undergo brain surgery.  While very frightening, this is an important option since controlling the seizures is essential in keeping Brenna on track developmentally. 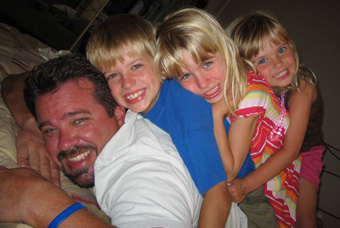 Surprisingly, Brenna’s biggest health challenges stem from her kidneys. She is currently on five blood pressure medications to control her very extreme blood pressure. The cysts in her kidneys cause her kidneys to be 4 to 5 times their normal size and make something as simple as getting clothes difficult.  Eventually, the cysts that are in her kidneys will take over all of the healthy tissue and she will need a kidney transplant.

Not all the news is bad.  Brenna is developmentally on track at this point, for which we are very grateful.  Many of the behavioral issues have never manifested nor did the autism. This could change at any time, but we try to focus on the here an now.  And the here and now keeps us busy enough. Brenna’s TSC manifestations require that she be monitored on a regular basis for any significant changes.  MRI’s, EEG’s, EKG’s, echocardiograms and ultrasounds are a regular occurrence for her. Brenna’s medical condition requires the involvement and cooperation of many medical professionals.  At this point, Brenna’s current medical team includes 8 pediatric specialists: a neurologist, cardiologist, ophthalmologist, nephrologist, neurosurgeon, endocrinologist, dermatologist and an orthopedist.  Unfortunately, we know that this list is only going to get larger as time goes on.

Brenna’s future is uncertain. TSC is in every cell and can affect every major organ in the body.  It is effectively described as a “shot gun blast” to the system.  Right now, in addition to brain tumors (cortical tubers scattered throughout her brain and subependymal nodules in her ventricles), Brenna has about a 20% risk for developing a giant cell astrocytoma (SEGA) that can grow and block the flow of brain fluid and almost always requires emergency brain surgery.  Brenna has heart tumors (rhabdomyomas) and small white patches on her skin (hypomelanmic macules) as well as a shagreen’s patch (a tough dimpled patch of “orange-peel like” skin) on her lower back. If you look closely you can begin to see the early signs of the disfiguring tumors (angiofibromas) that will grow on her beautiful little face and will eventually require laser surgery.  Brenna also has optic nerve involvement, which may affect her eyesight as she ages.  Since Brenna is female she has a 40% chance of developing a progressive lung disorder (lymphangioleiomymatosis or LAM) in her 30’s and 40’s.  LAM is considered fatal at this time.

You can see why we are very concerned for Brenna’s future.  However, no one in our family will ever lose the hope that we have for Brenna and we won’t accept this terrifying disease without a fight.  We are involved with the Tuberous Sclerosis Alliance of Orange County (TSAOC).

This organization has three main functions:

Hey Guys! We now have our very first art shop up and running! And the awesome part is that it’s totally powered by all the art our own Love Drop members have donated :) Which means that 100% of the proceeds directly benefit our families each month and the Love Drop organization.

And guess who inspired this idea? Kent! Father of this very month’s Love Drop family. We wanted to really bring together the art community this month, and we’re finding it’s a great way for artists to showcase their talents and really give back in a creative way.

If you look closely, you’ll also see hand-crafted glass hearts *exclusively* made for Love Drop!  Designed by Kent himself, these were inspired by our logo and are the focal point of our shop. He’s a brilliant, brilliant artist, and we’re honored to sell his work (which in turn goes to help his family this month!).

Here’s the link to our shop: http://LoveDrop.us/art

Thanks everyone! If you’d like to donate & promote any of your own stuff, click here. And if you have a wordpress blog, click here to get the widget for your site :)

In this episode we learn more about Brenna’s story from the people who are closest to her. It’s amazing to hear about all the things she and the family work through on a daily and weekly basis, and yet they remain firmly grounded in the fact that they love each other, have fun together, and share the same strong bonds that all healthy, happy families do.

Our favorite part of this video is when our videographer asks Brenna’s brother Nathan if he tries to take care of her, and he replies “…she for the most part can take care of herself.” This is a strong family, y’all. In so many ways. And little Brenna may just be the strongest of them all. :)

In this episode, we get a glimpse into Kent’s work, and how he came to be a glass blower. We also get a behind the scenes peak of his studio, and some of the cool pieces he’s made over the years (It’s pretty awesome!).

When all is said and done though, to Kent, it’s all about providing for his family. And it’s been a struggle. “Providing for my family is.. really all there is. There’s nothing else that’s more important…I’m working really 4 jobs, if you will – I have two businesses, a handyman, and I’m coming up with other ideas… I want to provide.”

We’ve got two more weeks to help them out, guys – let’s get it done!

Episode #4: The Kahlens Give Back

It was an inspirational experience for all of us on the Love Drop team to learn about all the different ways this family gives back to others. We’re proud to be a part of their lives this month!

We also get to meet Carey in this episode! She’s the Love Drop member who nominated the Kahlen family this month :) Really really cool watching her and Yvonne meet each other for the first time, and spreading that positive energy.

Their Love Drop goes down next week – see you there!

Now with 70% more kids, AND a special guest!

We did it, guys – Love Drop #4 was brilliant, and it’s mostly thanks to YOU! We were so touched this month by the strength of the Kahlen family’s love for one another, and we wanted to help give them some ways to hang out together and build some amazing memories without having to worry about cost, time and logistics.

Take a peek at the video to see how the entire team came together to make this happen for them. :)

Also watch for a cameo from Adam Baker and family, and more kids than we’ve ever had at a Love Drop before – we had so much fun this month, and hope you’ll join us for the next one.

(If you’re not a member of our team yet, it’s easy to join!)

Here is everything we gave them:
[For pictures of the Drop, click here.]

LOADS of tickets for their family to enjoy!

We’d like to thank all 1,000+ members of the Love Drop community! It is each and every one of YOU that powers the project and enables us to touch lives and inspire others each month. THANK YOU for everything you do – together we are making a real difference.